﻿﻿﻿﻿Is This Marijuana Pardon the Beginning of the End for Cannabis Prohibition? How President Biden’s review of federal marijuana offenses effects the future of cannabis laws in the U.S.

President Joe Biden on Thursday, October 6, announced the first federal action towards cannabis policy reform in the United States. President Biden also shared a series of tweets in an official White House Statement, outlining three actions to begin the process of reforming the country’s “failed approach to marijuana”. Thousands of Americans with records for marijuana possession were surprised to see this change in policy. While the plant is legal in many states this review of how marijuana arrests harm individuals comes as a surprise for legalization advocates, since the White House repeatedly stated that the President’s stance on prohibition had not changed. Biden announced this development just a month before the midterm elections. Many rejoiced after years of being convicted at disproportionate rates, while others thought it was just a smoke-screen.

The first executive order to relieve legal consequences for all federal prisoners convicted of simple possession of cannabis. The White House estimates that approximately 6,500 people with federal possession convictions will be eligible for the pardon, as well a few thousand more whose convictions took place in Washington, DC.

Today President @JoeBiden announced that he will pardon thousands of people with federal convictions for simple possession of cannabis. Furthermore, he's "calling on governors" to pardon state-level convictions. A number of states have already taken this initiative, but too many have not. Lastly, Biden says that he will direct the A.G. and Secretary of the Dept. of Health and Human Services to review the classification of marijuana at the federal level. Its status as a Schedule I substance has held since 1970.

Many are chiming in after the move. @natlnorml leaders were cautiously optimistic.

The second executive action the President is implementing is urging governors across the nation to follow his lead and relieve the same low-level possession convictions as well. Of the approximately 40,000 people incarcerated for petty cannabis crimes, the vast majority occured at the state level. As mentioned, the federal pardon impacts about 6,500, so around 34,000 will continue to sit in jail until more governors begin issuing mass pardons like Biden.

Will federal law change to represent the new cannabis policy?

Unfortunately in red states, these pardons aren’t likely to occur any time soon. Members of Congress and State Officials took to Twitter to share their thoughts on Biden’s actions, you can read all those responses here.

Governors in states including Colorado, Nevada, Pennsylvania, Connecticut, and Illinois, praised Biden’s executive action, noting the reform that they had already passed in their own respective states in the past few years that pardoned low-level cannabis crimes.

Some gubernatorial candidates like Charlie Crist pledged support to continue cannabis reform ahead of the November election:

Arkansas Governor Asa Hutchinson criticized aspects of the pardon (although he waited until exactly 4:20 pm to do so): 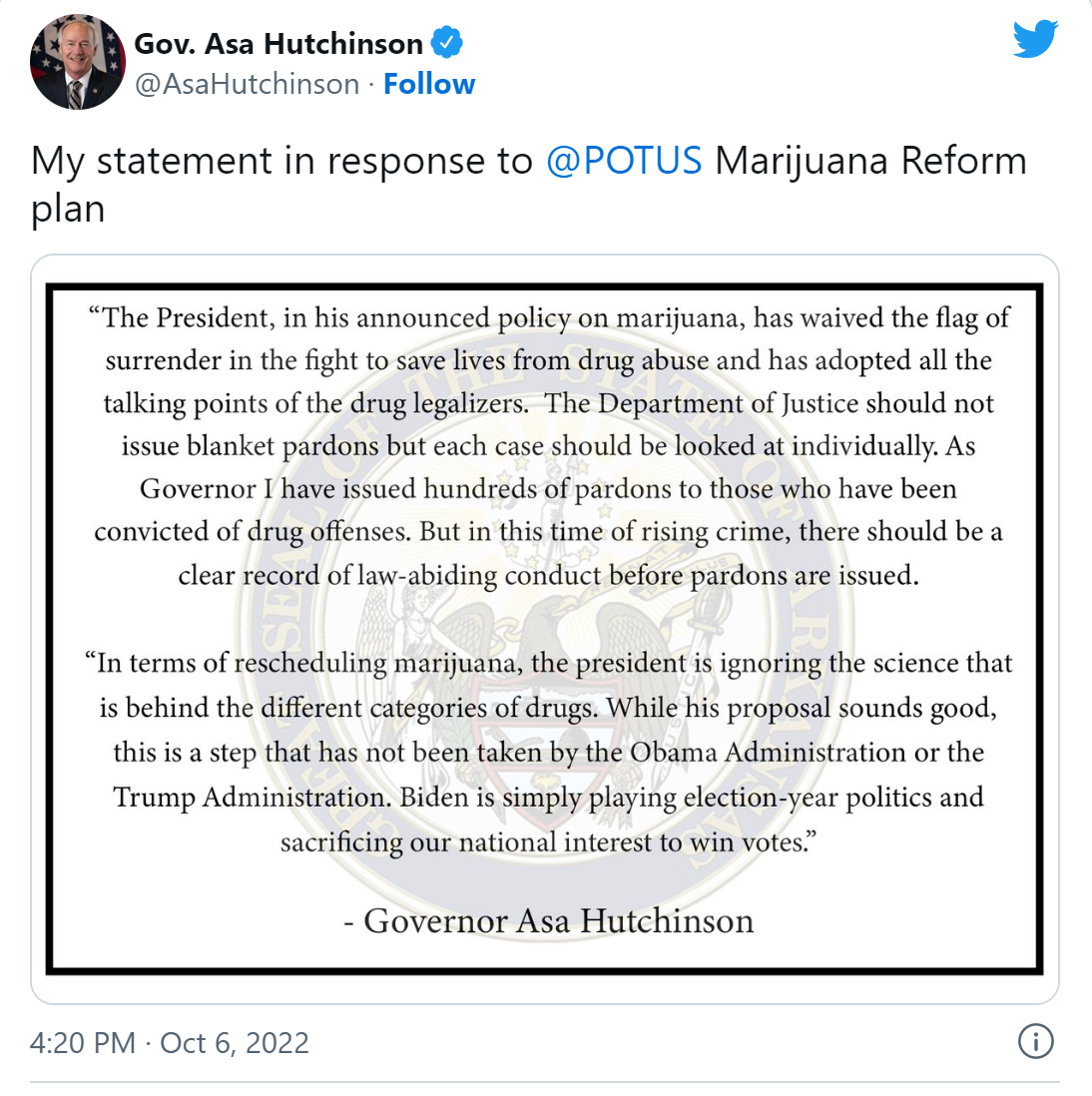 Local officials in Washington D.C., which legalized marijuana in 2014 but cannot legalize recreational marijuana sales due to the Congressional block on regulating the plant, used Biden’s announcement to shed light on D.C.’s campaign for statehood.

D.C. Mayor Muriel Bowser called for statehood to establish a safe adult-use market in the District. 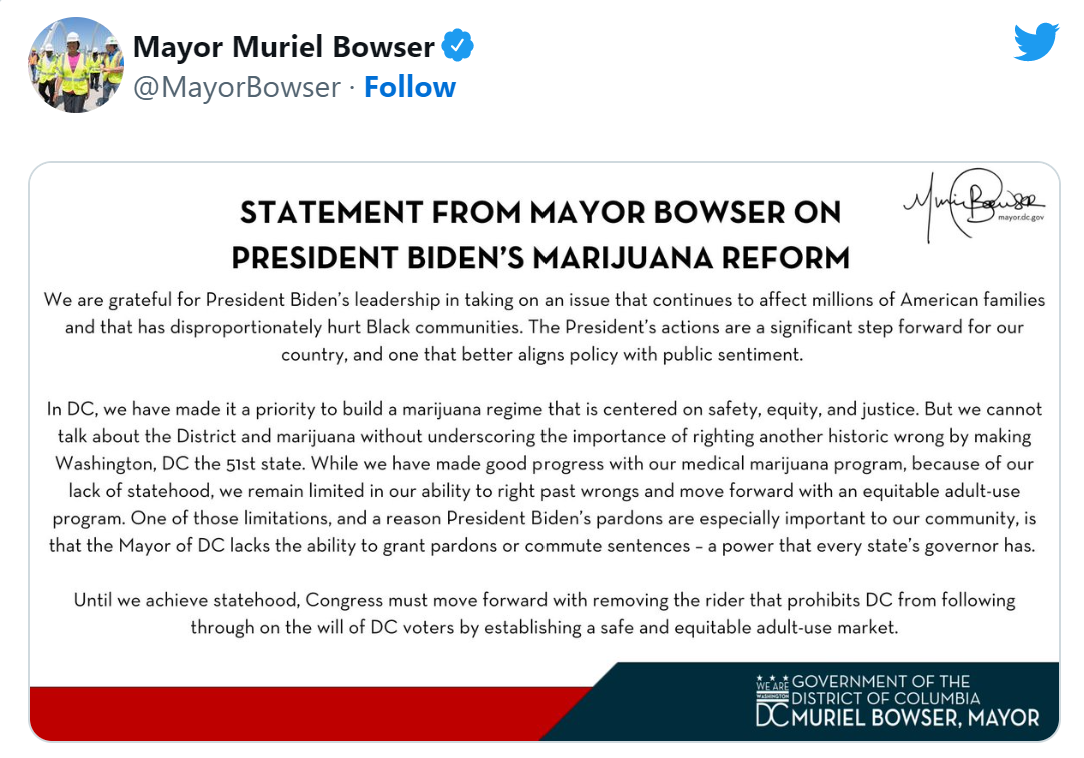 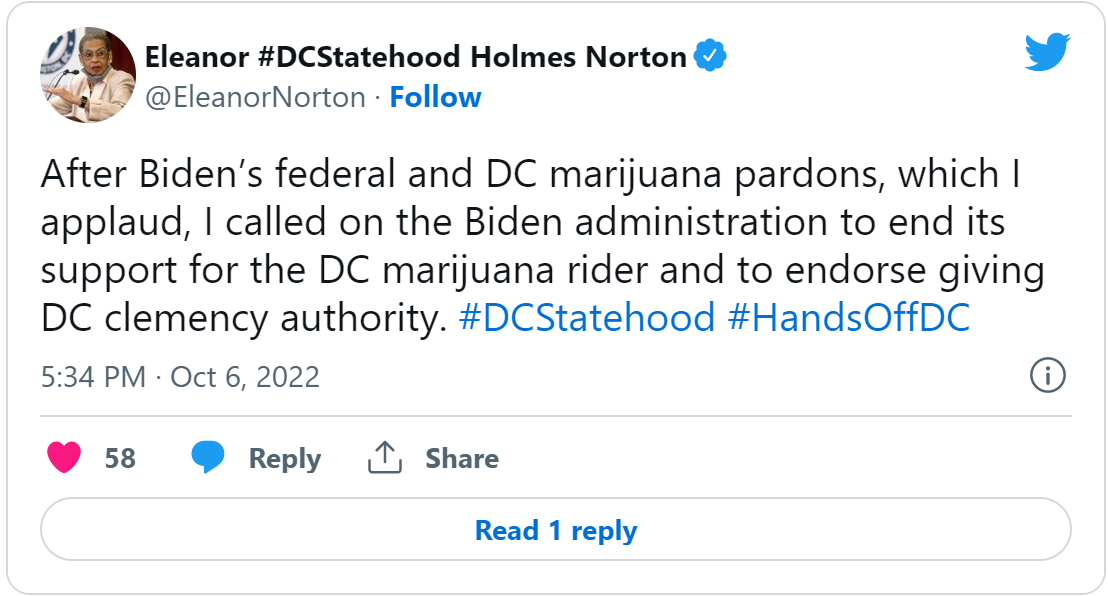 At the time of this publication, no Governor has committed to answering Biden’s call to issue pardons as well. We expect more updates on this in coming weeks.

The third aspect of Biden’s marijuana reform rollout is his request to the Health and Human Services Secretary and the Attorney General to initiate the process of reviewing how marijuana is scheduled under federal law. Marijuana is currently classified at the same level as heroin – and above fentanyl.

This aspect of Biden’s plan is the most important to the existing state-legal cannabis industry, which experiences operational hardships due to the status of of the plant under the Controlled Substances Act of 1971. For example, cannabis businesses that are operating legally in their state are not able to access banking, or write off basic business expenses which gravely impacts the success of small businesses.

While this unexpected reform is a massive win for weed advocates everywhere, it is just the beginning of a long road ahead towards federal legalization and social equity. While the pardons are a great first step, as noted by Congresswoman Alexandria Ocasio-Cortez the next step will be expungement. Until the convictions can be cleared from people’s records, we can only begin to restore social injustices that prohibition has caused.

Please check back in the coming weeks as we update this article with new developments in national cannabis reform and marijuana laws. And we urge you to PLEASE register to vote before Election Day on Tuesday, November 8th.

You can check every state that has an upcoming ballot measure regarding cannabis legalization here.