Researchers at the University of Alberta’s Department of Mechanical Engineering conducted experiments in January of 2019 seeking to “characterize marijuana smoke and contrast it against its well-understood analog - tobacco smoke - under identical testing conditions.” The study, entitled Comprehensive characterization of mainstream marijuana and tobacco smoke, was published in April of 2020 in the journal Scientific Reports.

According to researchers, the study displays the similarities between marijuana and tobacco smoke in terms of their “physical and chemical properties.”

“Recent increases in marijuana use and legalization without adequate knowledge of the risks necessitate the characterization of the billions of nanoparticles contained in each puff of smoke,” the study reads. “Tobacco smoke offers a benchmark given that it has been extensively studied. Tobacco and marijuana smoke particles are quantitatively similar in volatility, shape, density and number concentration, albeit with differences in size, total mass and chemical composition.”

The researchers found that marijuana smoke is on average 29% larger in mobility diameter with 3.4x more total mass compared to that of tobacco smoke particles. 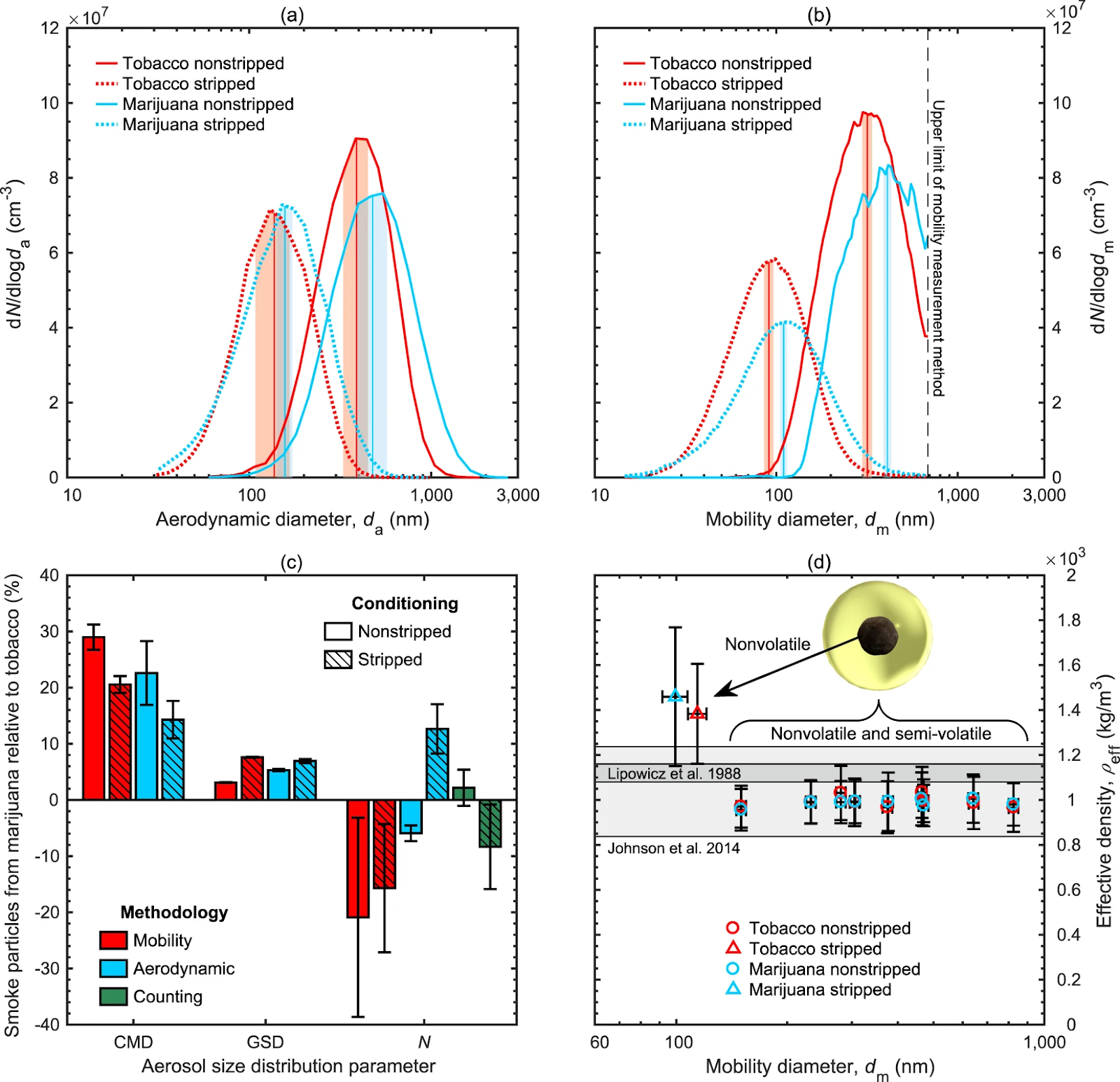 (From: Comprehensive characterization of mainstream marijuana and tobacco smoke)

The study was conducted by comparing the smoke produced from a non-filtered marijuana joint to a filtered tobacco cigarette, the most common methods of consumption for both tobacco and marijuana. Smoke samples were collected in a bag with “dilution air to allow common particle characterization techniques to be utilized.” Quartz filters were used to collect the smoke and measure its chemical composition and total particulate matter (TPM). 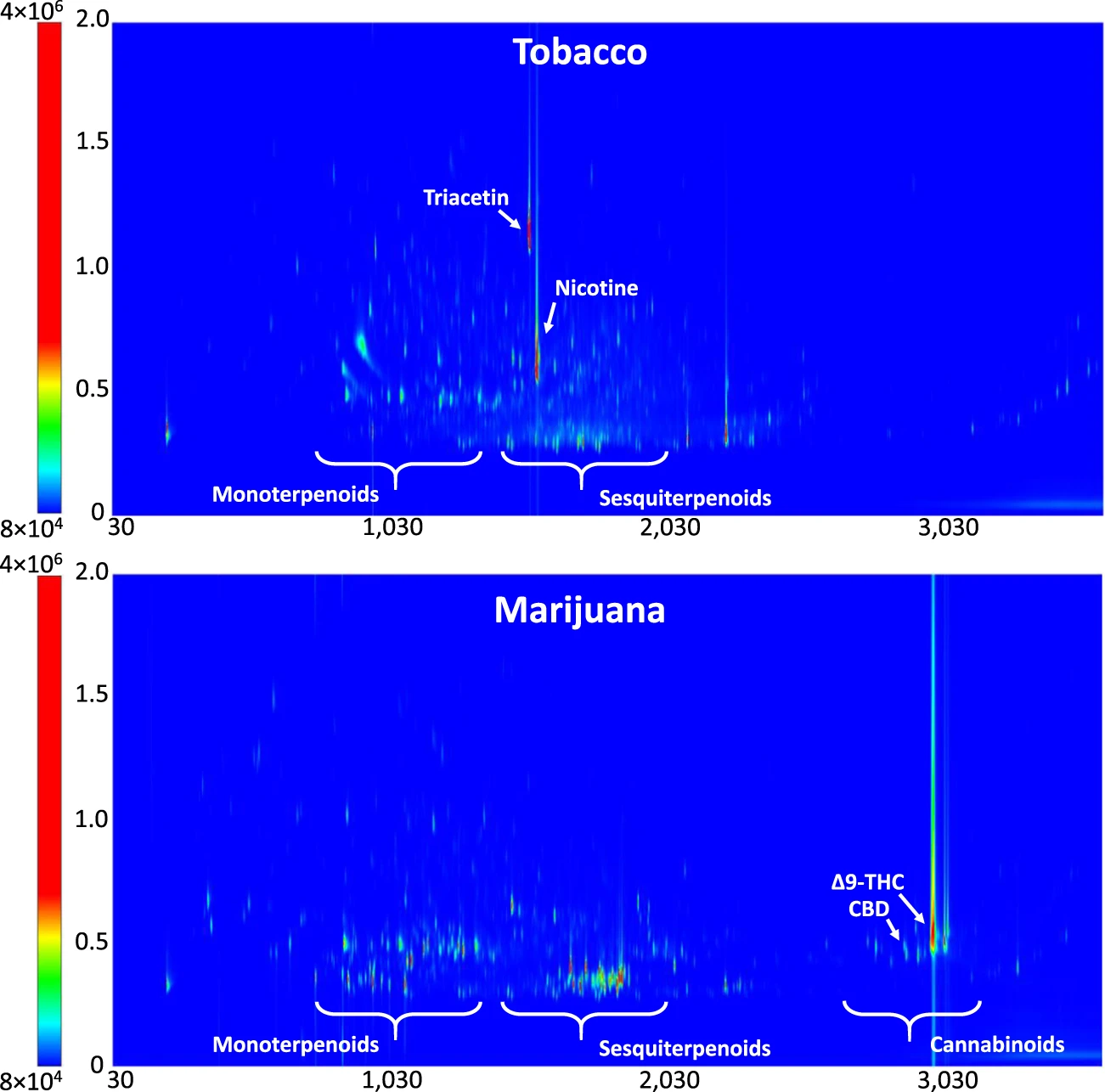 (From: Comprehensive characterization of mainstream marijuana and tobacco smoke)

“These two sampling methods, henceforth referred to as aged and fresh smoke, respectively, were identical between the measurements of the tobacco and marijuana smoke,” reads the study.

The study also offered insight into the health effects of marijuana smoke compared to tobacco smoke. Researchers stated that the physical characteristics of aerosol particles produced by the smoke from marijuana joints or tobacco cigarettes are “qualitatively similar with quantitative differences in size, mass and chemical composition.”

“Smoking a marijuana joint produces larger particles than a tobacco cigarette on average as reflected by the 23% (±6%) and 29% (±2%) larger aerodynamic and mobility count median diameters, respectively,” the study says. “Therefore, the measured differences in particle size between marijuana and tobacco smoke could have limited, but potentially significant implications for locations of deposition of the chemicals they carry into human lungs.”

In 2016, approximately 192.2 million people used marijuana, corresponding to about 3.9% of the global population aged 15-64 years. An estimated 12.9% of people in this age group in North America used marijuana in 2016.

MedHead 2 years ago
Report
This article would have been a lot more interesting, if the researchers had also elucidated the characteristics of non-combusted (vaporized) weed.
Update Cancel
Reply
View 1 repliesHide replies