After getting checked by the guard at the edge of the leafy, camouflaging gate, a walkway leads to an identification inspection followed by a bespoke, carved podium for reservation check-in. From there, you are ushered through the entrance of this low-key getaway, crafted from rustic materials, knotted wood, iron and neon. As you make your way to your table, the sounds of jazz-like chillwave music intermingle with the human sounds of guests, many of whom are sporting their most roaring flapper dresses, suit vests and suspenders. Light seeps through the open roofing, illuminating the atmospheric haze. Aromatics from a firing kitchen meet those of herbal dankosity. On the table is a matchbox and cast iron ashtray, both smartly branded. As you settle in, the wait staff comes through and asks what you would like to eat and drink and what you would like to smoke along with it.

The place isn't hidden and unmarked like many behind-the-building dispensaries all around Southern California. In fact, a billboard above the restaurant lets you know you're at the spot. And this isn’t a shady part of town. It’s West Hollywood, across the street from a $3,500/mo apartment complex and six blocks down from Jim Henson Studios. This isn’t a speakeasy from the bygone Prohibition era of the past; it's a cannabis café in the present that makes you feel like you’re living in the future.

Lowell Farms: A Cannabis Cafe is the first of its kind in the United States in over 100 years, both making history and righting a historical wrong. The company’s namesake ties back to 1909, when William “Bull” Lowell began growing Indian Hemp on his farm in coastal California. It was then that Henry J. Finger, who apparently had one up his, helped pass the 1913 Poison Act that outlawed marijuana. Nevertheless, the Bull persisted, and as a Taurus I respect that. Now, did Lowell get thrown in jail by the Finger? Yes, but! Long lives his name. His therianthropic image shines brightly on the far wall, looking buttoned-up and dapper yet blue-collar with rolled sleeves, yielding a shovel. It’s as if to say, “I’m not gonna follow your rules, and I’m gonna look good doing it.”

Throughout Lowell Cafe are carefully thought-out design decisions. The agrestic textures harken to that hard-working ideal and makes the space feel welcoming, warm and lived-in, as if it had been here all along and maybe you’ve only just found it. The overhead filtration system, of the same caliber as those used in casinos, prevents a hotbox situation and keeps the café from leaving a perfume trail down La Brea Avenue. Even the viney greens sprawling across the perimeter of the patio were planted with natural air purification assistance in mind.

On the culinary menu, there isn’t a single Funyun or crunchy gordita in sight. The restaurant’s head chef, Andrea Drummer, has several years of experience cooking with marijuana and has been featured in Vogue, Forbes, Marie Claire, Chelsea Does and Cooking On High on Netflix. She and her squad curated a lineup of dishes meant to complement cannabis, but due to regulations, none of the food itself is marijuana-infused. “The menu is inspired by seasonal offerings from local farms, cannabis consumption and personal food memory,” Drummer said. “Notably, there are a great number of fresh items that we thoughtfully source, as well as comfort foods and menu items reflective of growing up in my south Florida community.” 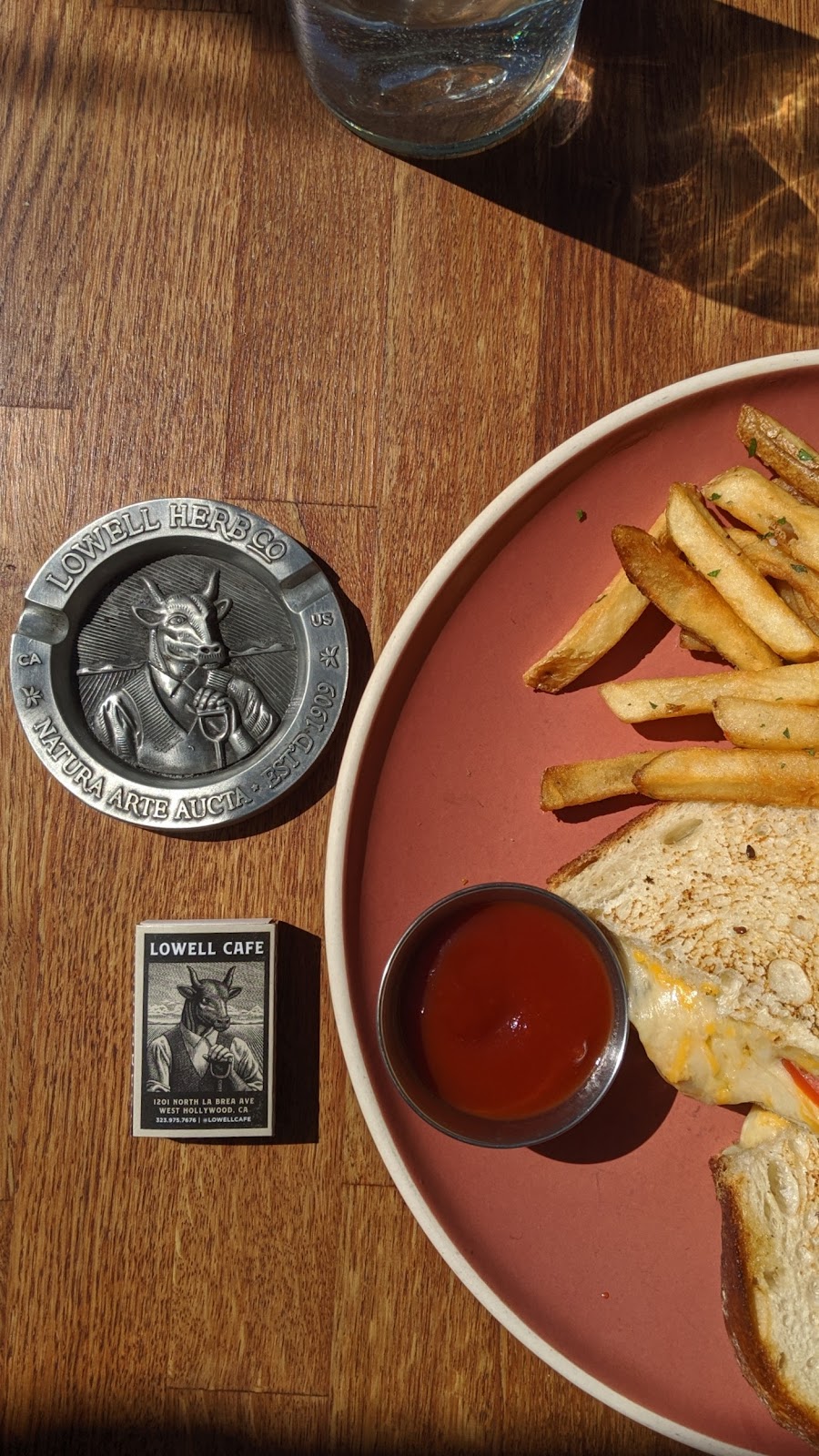 The baby kale salad comes with figs, goat cheese, mango citrus vinaigrette and hemp oil. The bahn mi, one of the many vegan offerings, is prepared with pasilla chile, daikon and chili glaze. Speaking of which, the Seriously Better Than Vegan, Vegan Nachos, topped with cauliflower meat, non-dairy cheese sauce, pico de gallo and more, makes a bold claim and lives up to it. One of the dishes I ordered was the grilled cheese, a three variety blend with heirloom tomato and dijon, expertly toasted. Expect prices from $10-$24 a plate. For dessert, a slice of Fruity Pebbles cheesecake, my favorite cereal and favorite dessert combined, or (and?) a milkshake with a handful of mix-in options cap off the edible journey. 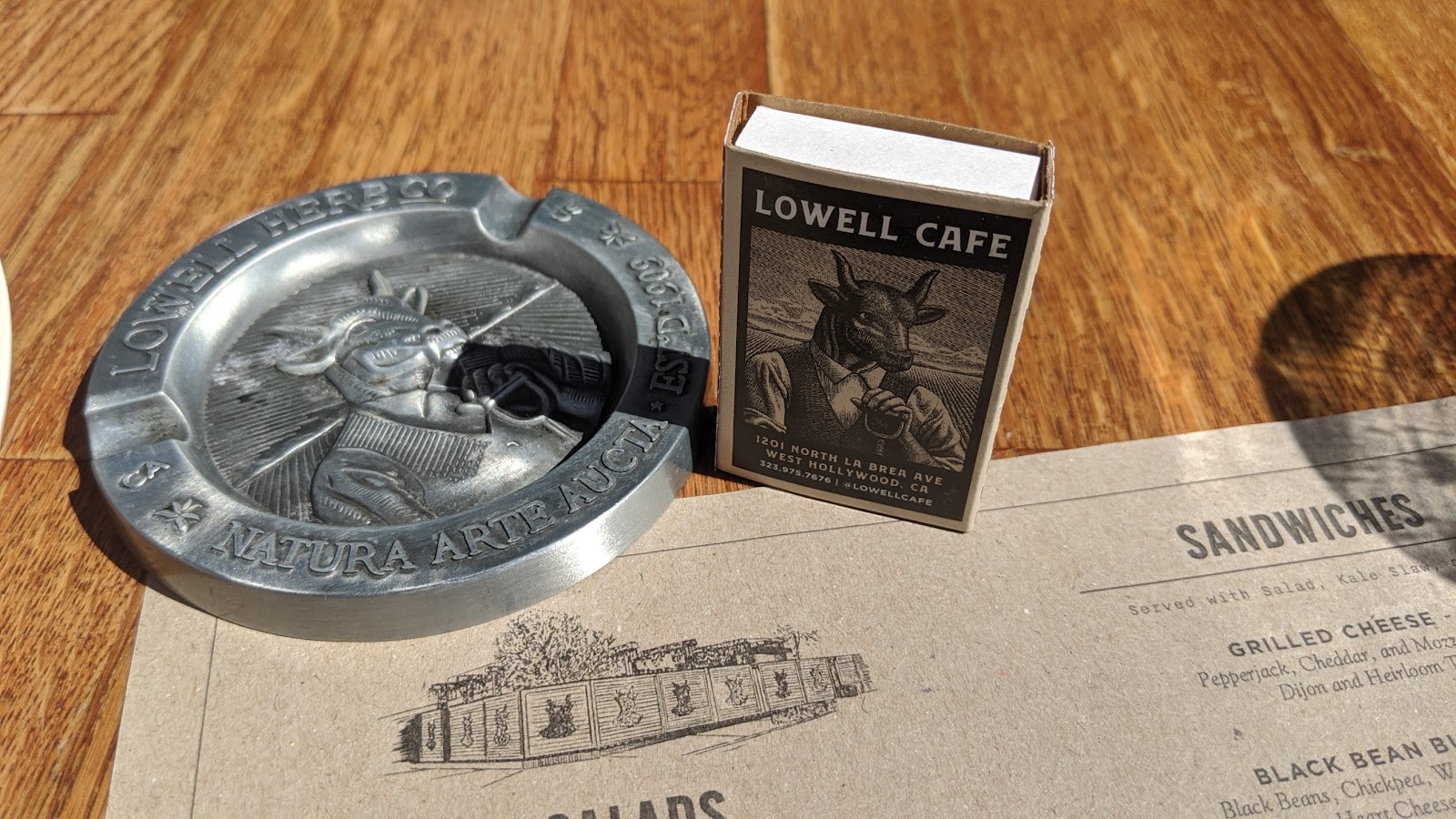 Also, you can order edibles. The cannabis menu, ten times larger than the food menu, with prices from $18-$65 and over $100, includes infused chocolates, gummies, mints, sodas, teas, and THC or CBD honey shots. Cold-pressed oil, prerolls by the single or pack, concentrates and flower sold by the eighth ounce featuring some choice selections from Lowell Farms ensure that everyone can partake in their preferred fashion. Three words describe expected effects from each product, such as the hybrid Peanut Butter’s “euphoric, hazy and sedative” vibes. Available for rent are the café’s house accessories, from stone and terracotta pipes to PuffCo Peaks to custom gravity bongs made by Stündenglass. 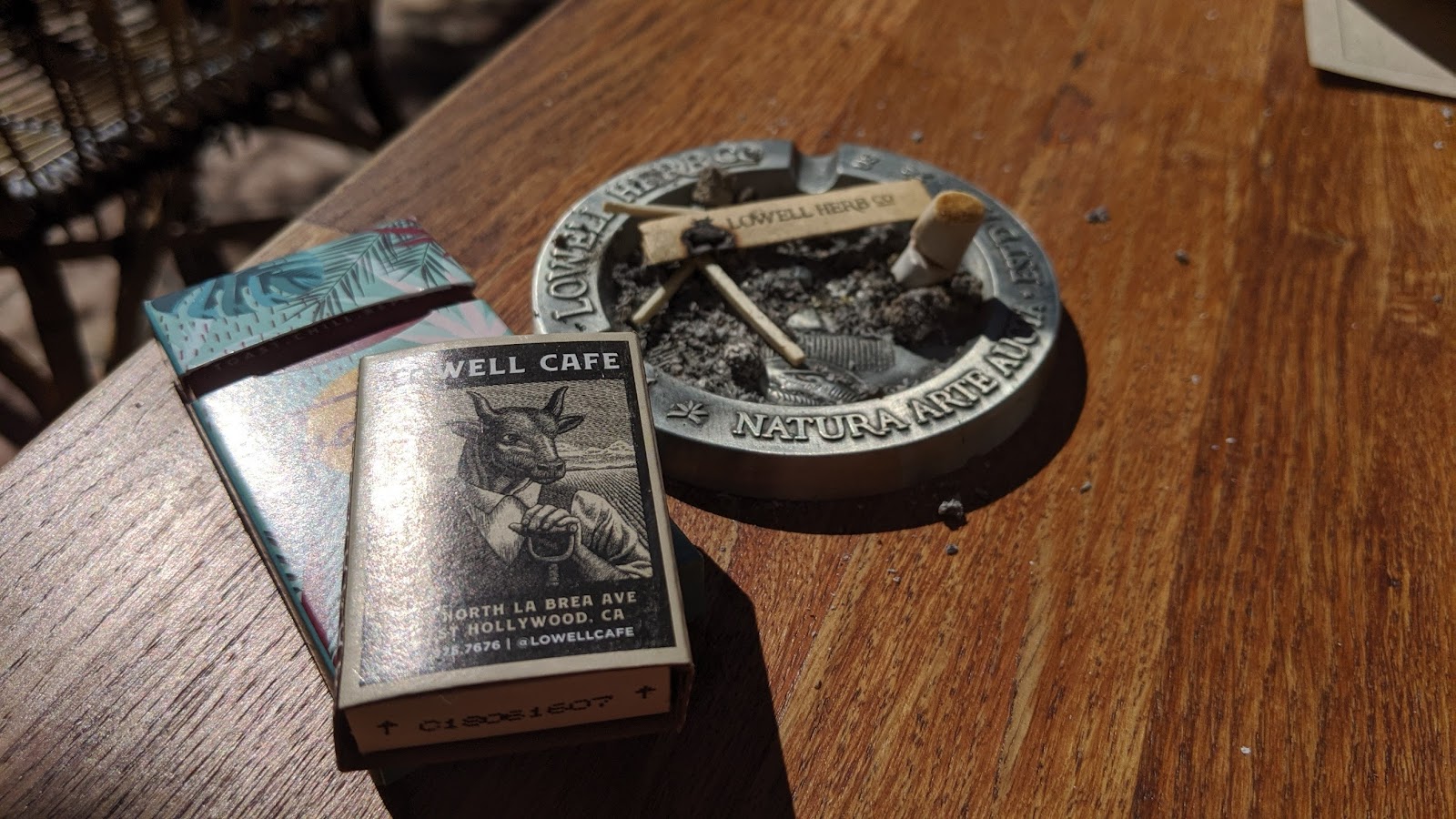 If you don’t have a reservation, expect for there to be a line in which to wait. Something about food and cannabis seems to entice guests to chill for a while. What serves as a punctuation to an already exceptional experience is the extraordinary staff. The cordial wait crew and hosts are reinforced by scrupulous Flower Hosts, providing expertise for those looking for recommendations and counsel for those meeting with Mary Jane for the first time. “We’re here to guide those beginner, canna-curious guests that we get. That’s what we’re here for. We want it to feel welcoming,” says Bianca Blanche, writer and host at Lowell Cafe. With the joint only being open for two weeks at the time of my visit, a sense of community had already been cultivating inside. Staff were recognizing guests from the last time and guests were introducing who came with them for a first-time experience to the staff. So overall, y’know, a rad energy. 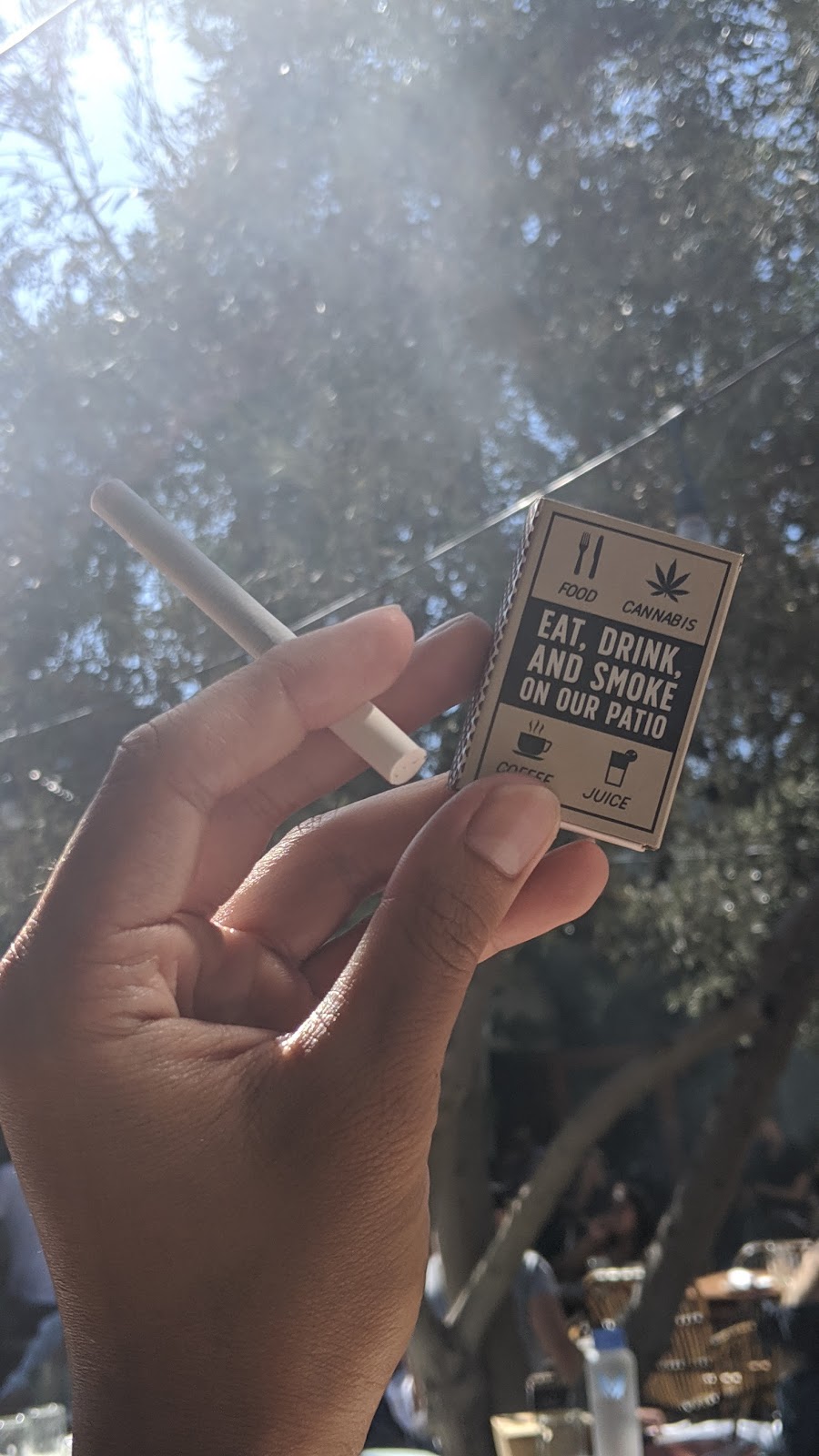 Among Lowell Cafe’s accomplishments is the triumphant deliverance of a proof-of-concept for subsequent establishments, presented in a detailed and professional manner. It’s that pioneering spirit that drives California and draws people to the western United States. Check it out, Bull, Prohibition is over and we’re giving it the finger.