MedMen Is Having To Get Creative To Pay Its Bills

“As part of the restructuring, the company has been actively working with its retail vendors on modifying payment terms, which in some cases include stock consideration,” MedMen Chief Financial Officer Zeeshan Hyder said in an emailed statement.

Recently, cannabis retailer MedMen has had to undergo significant company-wide changes, including massive employee layoffs. Now, according to an email from the company, MedMen is offering suppliers the full value of the amount owed in MedMen class B non-voting shares, a payment plan for the full value or a one-time cash payment of half the outstanding value.

“The company has been increasingly focused on managing its working capital and has continued to communicate payment status to its key vendors,” Hyder said via emailed statement. MedMen is one of the largest weed retailers in the United States, with a total of 33 store locations in nine states. The company generated $44 million in revenue in its fiscal first quarter.

Email shows $mmen $mmnff can’t pay its bills on time, but more importantly trying to give people free trading stock to settle debt. Shareholders would be diluted every day because mgmt was fiscally irresponsible, that is if they could clear it... @ScottW_Grizzle @WallandBroad pic.twitter.com/byuFZrLSAS

Earlier this month, MedMen amended a loan of $78 million that was due in 2020, to mature in 2022, though at a 15.5% coupon as opposed to the 7.5% it had. The company also closed a $20 million stock offering of class B stock, or roughly 47 million shares, according to Seaport Global analyst Brett Hundley.

According to Hundley, equity market funding slowed to a halt in September 2019. MedMen lagged in terms of realizing it would have difficulty attracting investing and was thus late in establishing essential cost-cutting procedures. Soon after, MedMen announced that they wouldn’t be able to access the remaining $115 million from a $250 million convertible debt deal they signed in earlier in the year with Gotham Green Partners, a cannabis-centered private equity firm. 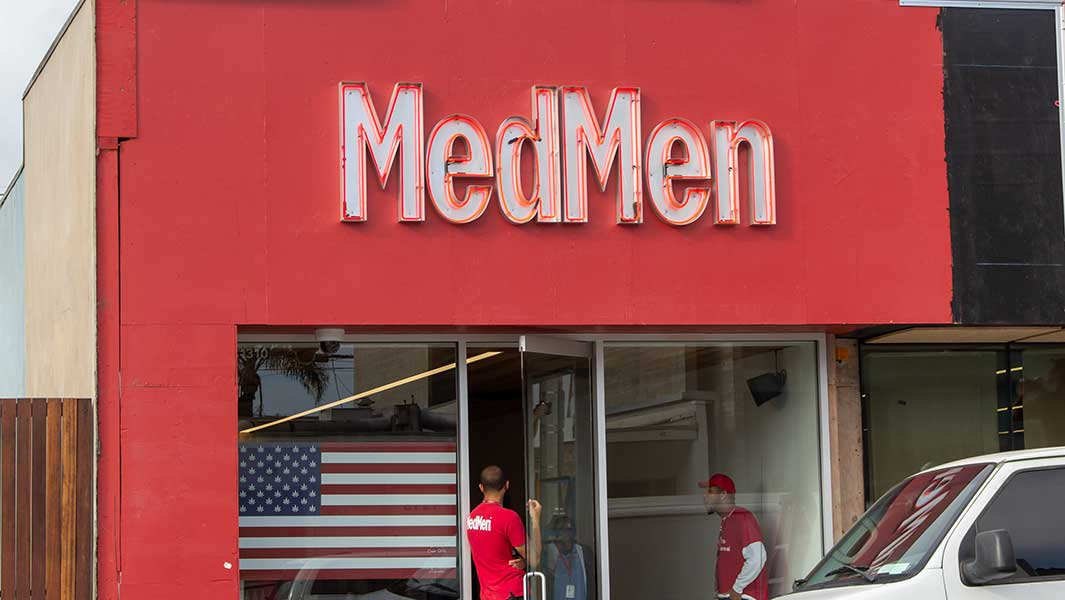 The timeline for MedMen has been a tumultuous one as of late. The company was forced to cancel a planned $682 million acquisition of PharmaCann LLC. In addition, non-core assets owned in Arizona and Illinois are being sold, brick-and-mortar store construction is being decelerated and capital expenditures are being receded. On the low-key, MedMen has been shopping around a license of theirs in New York, worth approximately $50 million to $100 million. Company executives have implemented a plan to cut up to $70 million in operating expenses by March. U.S. shares of MedMen have lost 84% of their value in the past year.

Founded in 2010 by Adam Bierman and Andrew Modlin, MedMen gained notoriety at the onset as a premiere dispensary and delivery service company, describing themselves as the “Apple store of pot.” MedMen’s high-profile retail locations include one in Manhattan, New York’s Times Square and on the famous Abbot Kinney Boulevard in Venice, California.