“Without a doubt, cannabis saved my life,” Kyle Turley told Benzinga. “I wouldn’t be where I am today; I would not have my family, my kids, my house, everything I have right now, if not for cannabis.” 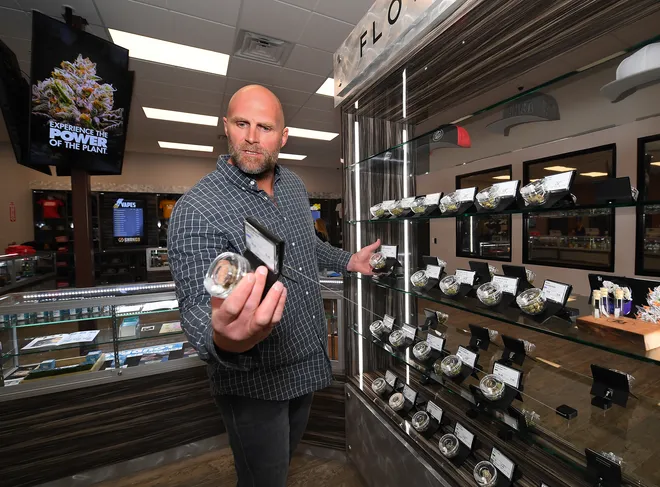 “This plant has now been set free,” said Turley. “Cannabis has played an important role in allowing me to personally manage pain, cope with CTE, improve my overall health and eliminate the need for prescription opioids that nearly cost me my life. I’m opening up a business here so we can allow players and veterans to recover naturally with proper dietary and organic therapies.”

Turley is a friend of Brandon Rexroad, the founder and CEO of the cannabis product company Shango. The dispensary is operated under the Shango brand ecosystem. Rexroad is a longtime California resident who grew up in Moreno Valley. The Moreno Valley Chamber of Commerce was present at the ribbon-cutting ceremony for the new store. Media, local government officials and business leaders along with the management team and owners of Shango were also at the opening event.

If you believe this happened for any other reason than science your likely fighting someone for toilet paper right now. #getupstandup pic.twitter.com/NYDucURTI7

“Opening a dispensary in Southern California has been a personal goal of mine since I started in the cannabis industry nearly 24 years ago,” said Rexroad. “We’re planning on making a positive impact on this community.”

Running a business in his hometown was important to Turley, who was an athlete in multiple sports at Moreno Valley High School.

“I’m so proud to be bringing a game-changing business to my hometown,” he said. “It’s pretty exciting and it kind of feels like I was destined for this.”

During his tenure in the National Football League (NFL), Turley was an outspoken advocate for therapeutic cannabis use in his sport, saying that he used marijuana while in the NFL to cope with vertigo, seizures, light sensitivity, pain and foot numbness and uncontrollable anger. Now living in Southern California with his family, he notes that cannabis has transformed his mental health.

“This is the first house I’ve ever lived in, now for five years, where I’ve not broke a door off a hinge, put a hole in the wall, thrown dishes and plates and lost my mind," he said to USA TODAY Sports.

Beyond himself, Turley stands by his claim that marijuana helped cure his wife, Stacy Turley, of skin cancer. He also says that cannabidiol (CBD) has helped boost the immune system of their two children, aged 9 and 11.

“It’s resolved my daughter’s sleeping disorder, my son’s attention span, hers as well,” Turley said. “And the doctors continue to tell us they’re the healthiest kids they’ve ever seen and they refuse to give them flu shots, refuse, because their immune systems are so strong.”

ASK YOUR DOCTOR TODAY ABOUT YOUR ENDOCANNABINOID SYSTEM & IT ROLE IN YOUR IMMUNE FUNCTION! pic.twitter.com/ZyyMBzuniW

Turley has gone as far as to imply that cannabis may have healing effects on the novel coronavirus sweeping through the globe.

“That’s something cannabis has a way to address," Turley told USA TODAY Sports. “The science behind this is real.”

There is currently no proven medication for COVID-19. While around the world, approximately six clinical trials are either in the planning stages or recruiting patients for hydroxychloroquine, a common anti-malaria drug being tested for its effectiveness in eliminating the COVID-19 virus, it has not been approved as a treatment for the disease and evidence supporting its efficacy remains limited, according to Dr. Tony Fauci, director of the National Institute of Allergy and Infectious Diseases.